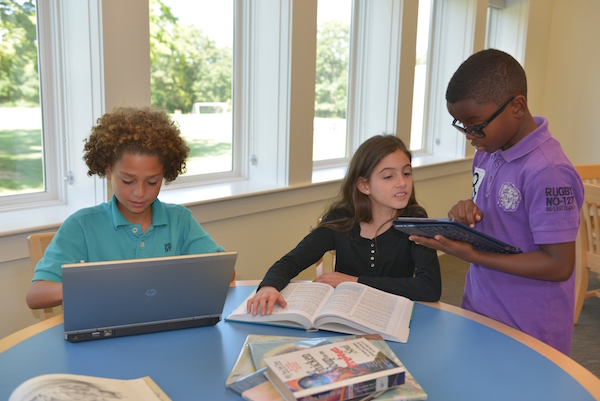 Here are some examples of how iPads have been integrated into our academic subjects, transforming the way our teachers teach and our students learn:

Math – Areas of Polygons: Using an app called Geoboard and GeoGebra Algebraic Expressions and another app called Explain Everything to record themselves solving a problem and sharing that with classmates and teachers.

Science – Boyle’s & Charles’ Laws about the Properties of Gases: Use Gas Laws HD app to see 3D interactive lessons and examples. For Atomic Theory, students create a book using Book Creator App explaining the history and development of such. By using the Side-by-Side app, students can have multiple websites open simultaneously.  This has really helped them with their flipped classroom work in science.

English: Students are using the Subtext app that allows them to respond individually to questions on their first novel and to participate in virtual discussions where everyone gets a chance to respond and/or ask a question.

World Languages: Create a monologue using one of the apps discussing likes and dislikes about leisure time and food in the specific culture. For example, a multidimensional learning app for Spanish called Tiny Tap allows students to hear vocabulary spoken by a native speaker, identify objects visually, practice math facts in Spanish, and so on.

We are still accepting applications for the fall.

Chapin welcomes students who are curious, engaged learners whose families value our belief that lifelong habits of mind and heart are formed in the elementary and middle school years.

Please call the Admission Office at 609-986-1702 or Inquire here for more information!