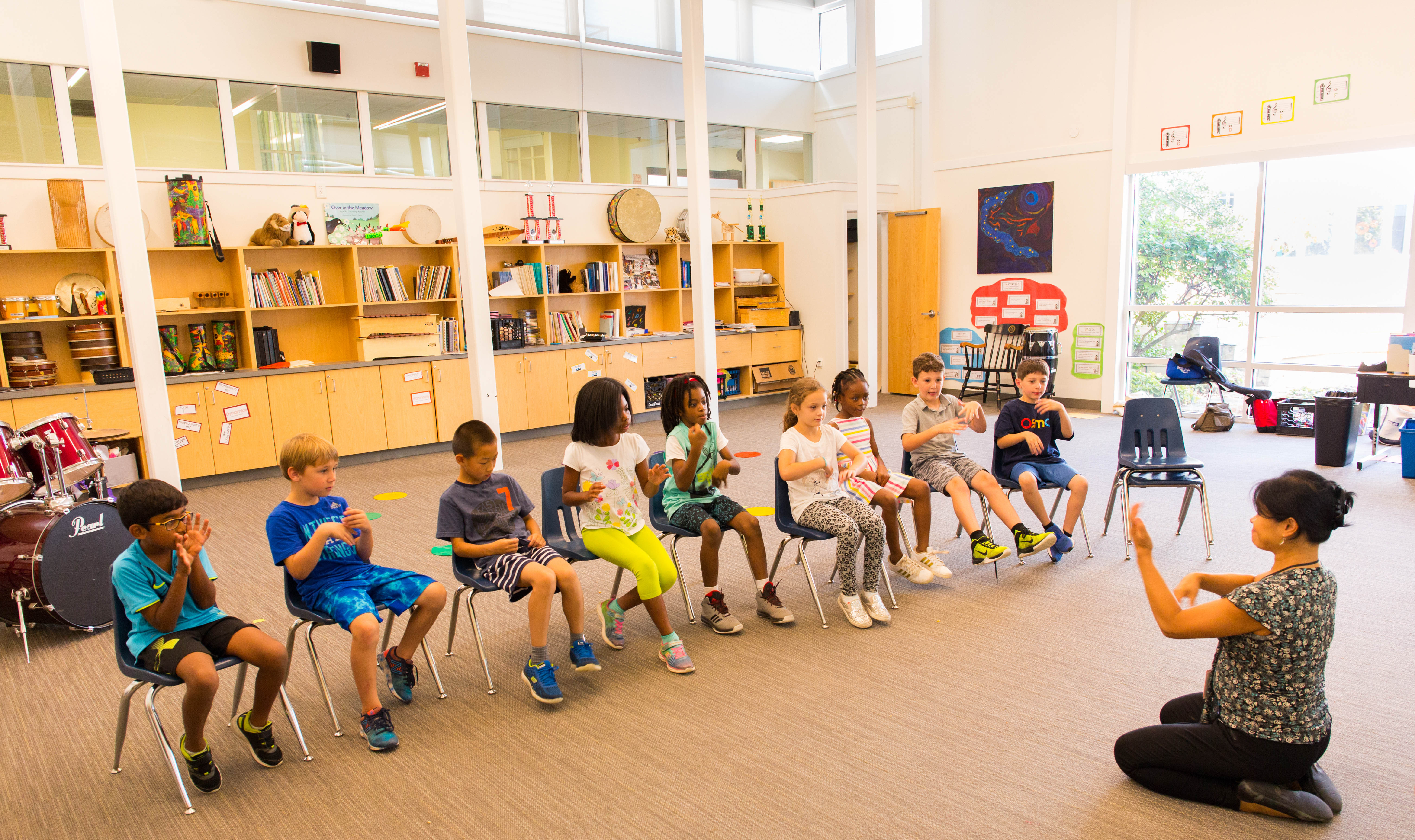 "For heights and depths no words can reach....music is the soul's own speech."
The music classroom becomes a place where every aspect of musical behavior is addressed: performing, creating, listening, and analyzing. As performers, students are singing songs, playing body percussion (clapping, snapping, stamping, etc.), chanting rhymes, dancing folk dances, playing singing games, and playing instruments. As creators, they are acting out songs and stories, creating original dances, improvising melodies to a given rhythm, and composing their own arrangements to songs. As listeners, they are playing music as part of an ensemble and hearing their part in the context of other musicians. They are also self-evaluating as they listen, enabling them to improve their performance. As analyzers, students are describing what they hear through words, pictures, movement, solfege syllables, hand signs, and music notation.
Every student at Chapin receives general music instruction beginning in prekindergarten, with the option of more specialized ensemble experiences starting in grade five. In addition to a variety of musical performances throughout the grade levels, students can be involved in a number of the following ensembles:

Third and Fourth Grade Chorus
Mandatory for third and fourth grade students, where they explore the singing voice in an ensemble setting and work on musical literacy skills. Students participate in winter and spring performances. Rehearsal is once a week during the school day.

Fifth Grade Band
Students choose to learn flute, clarinet, saxophone, violin, snare drum, glockenspiel, trumpet, baritone horn or trombone.
*Mandatory for all fifth graders, students choose to participate in either Chorus or Beginning Band, where rehearsal for the winter and spring concerts takes place once a week during the school day.

Show Choir
Open to students in grades 5 – 8, students prepare scenes and choreographed musical selections from a major musical. Students participate in both winter and spring concerts, as well as the Music in the Parks Festival. Rehearsal is Wednesdays after school.

Chamber Choir
Open to students in grades 6 – 8, students learn and perform more challenging choral literature, reflecting diverse musical styles, and participate in both winter and spring concerts as well as in the Music in the Parks Festival. Rehearsal is twice a week during the school day.

"Music is the universal language of mankind."  (Confusious)

​From prekindergarten to grade eight, students are exposed to various musical instruments. From experimenting with recorders to hand bells, the children of Chapin learn to make music.

In addition to their weekly music class, fifth grade students choose to learn both violin and cello, glockenspiel and snare drum, or trumpet. The students perform in the spring concert.

Instrumental Ensemble is open to students in grades six to eight who usually have at least one year of experience playing an instrument. Students refine ensemble skills and perform in the spring concert.

Dedicated musicians in grades five to eight rehearse each week and perform for the school community.

Private music lessons are offered after school for students prekindergarten to grade eight at an additional cost. Click here for more information.

"Art enables us to find ourselves and lose ourselves at the same time.”   (Thomas Merton)

Creativity through the arts is an essential component of the educational process.  Students are imaginative by nature and create works of art through drawing and painting, constructing and manipulating, molding and building.  The Chapin School visual arts program encourages, teaches, supports and enhances techniques and skills needed to foster life-long creativity and appreciation of the arts.

The art curriculum provides a full spectrum of well-rounded art activities that encourage students to think, analyze, respect and experience visual art in its many forms.  The art lessons inspire students to think aesthetically, discover and experience what it’s like to learn about an artist's life, complete artist inspired work, share ideas and respect one another’s efforts, experiment with a wide variety of mediums as well as the practice of using tools to enhance art skills.

We emphasize process by building on the skills learned the preceding year.  Printmaking, painting, drawing, pottery, collage, weaving and papier mâché are explored at each grade level.  Art vocabulary, techniques and skills are presented with each medium; and we work closely with grade-level and subject-matter teachers to extend and to enrich their curriculum.  Through these processes, students learn to think creatively, to employ critical thinking skills and to express ideas as they recognize and appreciate the aesthetic qualities inherent in art.

"All the world ‘s a stage, and all the men and women merely players. They have their exits and their entrances; and one man in his time plays many parts."   (Shakespeare)

At Chapin, we believe drama is an essential element of a comprehensive academic curriculum.  The drama program allows students to transform, reflect, and act upon the human condition.  A collaborative art form driven by inquiry, drama actively engages students in the process of creation, and encourages students to implement their ideas while simultaneously responding critically to a variety of work.

Drama helps students understand how the arts shape the diverse cultures of both past and present societies.  Students learn to take risks and express their thoughts and feelings.  Drama develops the “whole child” through physical, emotional, intellectual and social interaction.  Winifred Ward, a pioneer in the field of educational theatre explains: “Its objectives are to give each child an avenue for self expression, guide his creative imagination, provide for a controlled emotional outlet, help him in the building of fine attitudes and appreciations and to give him opportunities to grow in social cooperation.”  Through the process of ensemble rehearsal and performance, the ultimate goal is for students to learn how to give to the audience rather than just take from the play.